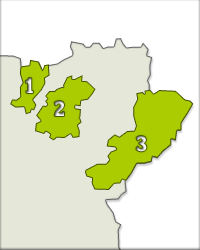 In the North-East corner of Portugal, in the North of Douro Region, there exists the wine region of Trás-os-Montes, which is besides divided into three subregions: Chaves, Valpaços and Planalto Mirandês (=Mirandese Plateau).

The name Trás-os-Montes (=Beyond the Mountains) refers to the location of the region: it is situated beyond the mountain chains of Marão and Alvão, north of Douro River. It is a mountain area with mainly granite soils.

Its climate is dry and very warm in the summer, though it often reaches negative values in the winter.

In Chaves subregion vineyards are cultivated on the slopes of little valleys, along which run the tributaries of the Tâmega River. Valpaços subregion is rich in hydraulic resources and is located on a plateau. The Douro River clearly influences viticulture in the Mirandese Plateau.

The cultivated breeds are virtually the same in the three subregions. The most habitual red breeds are Trincadeira, Bastardo, Marufo, Tinta Roriz, Touriga Nacional and Touriga Franca. The white ones are instead Síria, Fernão Pires, Gouveio, Malvasia Fina, Rabigato and Viosinho.

Regional red wines are usually fruity and slightly stringent. White wines are soft and have a floral taste.

#Top of the page